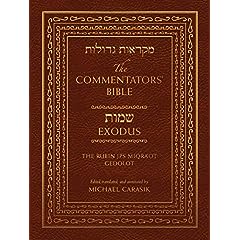 Somehow I missed this when it was published. But I want one. The Commentator's Bible: The Jps Miqra'ot Gedolot: Exodus

is apparently a translation into English of the Rabbinic Bible, and has translations of Rashi, Ibn Ezra, Nahmanides, Rashbam, and other medieval Jewish commentators alongside the Bible text. Just for Abraham Ibn Ezra's sensible and often insightful remarks alone it would be worth the US$75 asking price, it has to be a steal at Amazon's discount...

Just by checking the sample page available on the JPS website, I immediately saw that much of Ibn Ezra was missing.

So, if anyone has seen the volume, is Berel right, or is this a volume I want to own?

There are two commentaries by Ibn Ezra, the "short" commentary that normally appears in Mikraos Gedolos (Rabbinic Bibles) and the "long" commentary (to the best of my knowledge, the only English translation of this is the five volume series by Strickman and Silver.)

However, in the case of Shemos (Exodus), the "short" commentary of Ibn Ezra was lost for several centuries (we now have it) so Ramban (Nachmanides), who lived only a century after Ibn Ezra, only knew Ibn Ezra's "long" commentary.

The problem, of course, is that Ibn Ezra goes on for pages with some of his comments, so a translation that presented the "long" commentary would be -- well -- mostly Ibn Ezra. To solve this problem, Carasik made a hybrid solution -- he included Ibn Ezra's "short" commentary and then enhanced it with extracts from the "long" commentary -- including every point to which Ramban responds. The result is that Ibn Ezra still takes up more space on the page than any other commentator, but a sense of balance is maintained.

If your interest is primarily Ibn Ezra, I'd get the Strickman-Silver set -- if you are interested in how the commentators interact with each other, I think that the Carasik volume will serve your needs nicely.

Thanks, Anon, that's really helpful. For Exodus (not a strong interest of mine, I suspect the Carasik volume will be ideal. If the work was Genesis, Amos or Jonah I might need both!

My Hebrew is not really up to reading long swathes of commentary in the original, so an English translation is most welcome.

Hello - this is the trouble-maker writing in person! If you look at the JPS website, it has a FAQ on the book in question at:
http://www.jewishpub.org/pdf/Question&Answers.pdf
It includes the following:
"So this is a free translation?
Yes. First of all, remember that in their original work the commentators quote and comment
on the Hebrew text. In this version, they quote instead the NJPS translation and, if
they disagree with it, supplement it with the OJPS or with their own understanding of the
meaning.Also, since most of us today do not have as thorough a grounding in Jewish sources
as did the Hebrew readers of the original commentaries, the commentators must explain
things a bit more fully when they “write” in English. For similar reasons, they omit grammatical
comments and explanations that are both complicated and extraneous."

I find the way this is written somewhat off-putting, but I understand it as admitting that "grammatical
comments and explanations that are both complicated and extraneous" are edited out of the commentaries. In other words, the commentaries are, in fact, abridged.