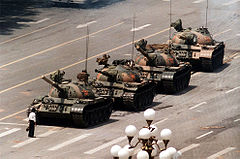 A while back lots of people complained when Google caved in to Chinese pressure and began systematic censoring of political information on Google.cn (the example most often used was image searches for "Tianamen Square" which allover the world, except in China, showed most prominently a lonely activist facing down a tank - in China only innocuous tourist photos.

At last thanks to "someone" attempting to unearth information (in part from their Gmail accounts) about Chinese political activists Google has got a conscience and is changing its policy. As a result the Google blog says:

We have decided we are no longer willing to continue censoring our results on Google.cn, and so over the next few weeks we will be discussing with the Chinese government the basis on which we could operate an unfiltered search engine within the law, if at all. We recognize that this may well mean having to shut down Google.cn, and potentially our offices in China.

A moderately large step for a corporation, a giant leap for humanity!

I just hope that Google keep its word. Someone has to deal with China and its abuse of human rights.

Timing is so critical. I suspect it's a good thing that Google waited as long as it did to make this a line in the sand. The Chineese people are more likely to notice, now.