According to the Reuters report, "Developing nations to test new $150 laptops" the One Laptop per Child project should start delivering the first few thousand innovative tough laptops to "to eight nations in February".

This project is smart enough, new enough and visionary enough that anyone with a love of technology and half an imagination is bound to be excited by the possibilities. But recently I've begun to think of the possible unintended consequences.

These first 2,500 machines will inevitably be concentrated in villages associated with prominent people. But what about the next million or six? If they too are concentrated in the hands of the villages, tribes, and language groups of the powerful will Western altruism in trying to bridge one "digital divide" widen another? Or will organisations like World Vision ensure that they also get in significant numbers to the least "advantaged"?

And, what about the effect on child labour? It takes very little imagination, and kids even in the poorest places have huge imaginations, to envisage thousands of ways these laptops can be used to make a buck (and adult daily wages are little more than that) using these machines. Will pictures like these:

merely be replaced by this (without the smiles)? 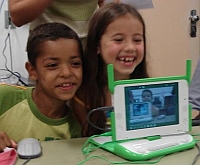 Did you listen to this interview Kim Hill did a week or two back? All about the OLPC project.

Thanks for the link! Not only a fun interview, but listening gave me a bright idea, within a year or three these (multimedia) laptops will be in villages across the world. Many of the (grand)parents of these kids will be illiterate and/or in hard to reach places... what a great way to distribute Scripture in mp3 format. Let the Bible be heard in places print Bibles cannot reach!