SansBlogue
Thursday, December 17, 2009
Science or commerce? Copy right or copywrong?
Duane posted an abnormally interesting certificate which came from Lawrence Lessig's keynote talk to EDUCAUSE09. The video is here (I have not seen it as we only have slow intermittent Internet here on the Thai-Burma border). 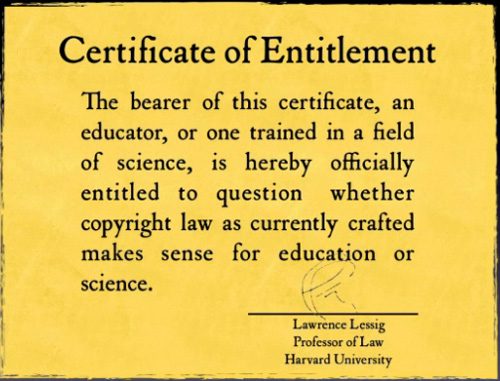 I posted a long comment on Duane's blog, but since I am unlikely to post anything else here in the next while, on holiday with intermittent Internet, I'll reproduce here in even more extended and focused form, as a post.

Copyright, which seems to mean the right to forbid others to copy, may or may not be theft. Actually, of course it is NOT theft, producers of creative works have the right to obtain a reasonable (or at least today an unreasonable, if they are sufficiently famous) income from their work.

But copyright certainly IS the antithesis of science, since any science worthy of the name is open to debate and criticism.

Education is more interesting. There are two extreme cases:
Technology is another really interesting case, which Lessig (on this slide, as I have not seen the whole, having slow intermittent Internet here on the Thai-Burma border) does not mention.

As for education, the question is: Is technology science or commerce?

Now let's consider the case of theological study or education. Is copyright right or wrong? Is theology science (in this post I have tried consistently to use "science" in it's European sense of an open and criticisable body of knowledge) or commerce?